The Los Angeles Auto Show will be marked for Ford Motor Co. by release of American versions of the new Fiesta subcompact on Wednesday. 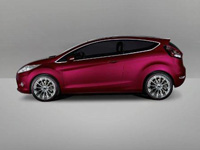 Ford is hoping that the Fiesta and the U.S. version of the European Focus will take sales from the competition as the market shifts toward well-appointed smaller, more efficient vehicles. The company plans to bring in six compact and subcompact vehicles from Europe by 2012.

The Fiesta, powered by a 119 horsepower, 1.6-liter four-cylinder engine, is expected to get at least 30 mpg in the city and 40 mpg on the highway when paired with a new six-speed automatic transmission. A five-speed manual also is available.

The car will come in four-door and hatchback models, weigh about 2,600 pounds, and compete mainly against the Toyota Yaris and Honda's Fit.

Knowing that Americans are concerned about safety of smaller cars, Ford says it has installed features such as standard electronic stability control and front, knee, side and head-protecting air bags. The Fiesta also has high-strength steel in key impact-absorbing areas.

During previews of the Fiesta last month in Dearborn, engineers and designers explained how they changed the European Fiesta as little as possible, keeping its sleek looks, crisp handling and speedy performance.

Ford had to lengthen the front bumper to meet U.S. safety requirements, and it also had to move the lower part of the dashboard rearward to slow unbelted occupants in a collision.

Also inside the car, it added adjustable cupholders that can grip anything from a thin energy drink can to a 7-Eleven Big Gulp cup.

Erich Merkle, president of the auto industry consulting firm autoconomy.com in Grand Rapids, Mich., said the Fiesta is a lot of car for the money, with styling and features not found in competitors.

The car should successfully attract younger buyers who don't have a lot of money yet want their cars to stand out, Merkle said.