U.S. Dollar Declines to Its 14-year Low against Yen

Thursday the U.S. dollar fell to a 14-year low against the yen in Asia. Than it bounced back somewhat, as a mounting view that the U.S. will continue to cling to its rock-bottom interest rates trumped a stepped-up warning from the Japanese government. 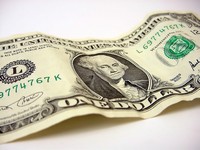 U.S. Dollar Declines to Its 14-year Low against Yen

The move came as the Philippines, Thailand, Singapore and South Korea appeared to sell their currencies Thursday, fending off the dollar's slide that threatens their export-oriented economies. But the interventions were small, reflecting a view that Asian authorities are powerless in halting a broad sell-off in the U.S. currency.

A foreign exchange dealer scratches his head as he trades at a foreign currency brokerage firm in Tokyo November 25, 2009.

The decline came despite a ratcheted-up warning from Japanese Finance Minister Hirohisa Fujii that he will monitor dollar-yen movement "very closely," The Wall Street Journal reports.

Meanwhile, traders and analysts think Japan would need cooperation from the United States and Europe if it wanted to step in to buy dollars. This seems unlikely, particularly as the Federal Reserve described the dollar's recent drop as "orderly.

Market participants say the United States has little incentive to intervene when Treasuries continue to draw global funds and it is pressing for global trade to be rebalanced -- something analysts say means the dollar has to weaken.

Officials say they must act appropriately against "abnormal" moves but one-month dollar/yen implied volatility, a measure of expected fluctuations, has jumped. It is still below 16 percent, where it has been since April, which suggests market moves are not disorderly, Reuters reports.

It was also reported, the Japanese authorities “appear to have become more willing to tolerate a stronger yen,” said Wai Ho Leong, senior regional economist at Barclays Capital in Singapore, adding that many companies in Japan and other Asian nations have learned to cope with these currency effects better than before.

Many economies also stand to reap some benefits from a declining dollar, as a weak U.S. currency also makes imports denominated in dollars — like oil — cheaper, he said.

Still, the pronounced realignments between the world’s currencies are creating much unease as governments fret about the potential drawbacks to their economies.

China for, instance, has come under pressure to let its currency rise against the dollar. Most analysts, however, say they believe the Chinese authorities will not allow such an appreciation until they have much more solid evidence that exports and domestic demand have recovered for good, The New York Times reports.