U.S. Teems with Busy Retailers and Shoppers on Black Friday

The day after U.S. Thanksgiving is known as Black Friday, the traditional beginning of holiday buying. Explanations of the phrase’s origins differ, one holding that it’s the weekend when retailers go to being in the black, profitable for the year. 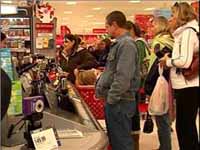 U.S. Teems with Busy Retailers and Shoppers on Black Friday

As many as 134 million people plan to shop over the weekend, 4.7 % more than last year, according to the National Retail Federation, a Washington-based trade group. Yet, spending may fall during the holidays. Shoppers may spend an average of $682.74 on Christmas gifts this year, compared with $705.01 last year, according to a survey by the federation.

Wal-Mart Stores Inc., Kohl’s Corp. and Toys ‘R’ Us Inc. are competing for customers with discounts and extended Black Friday hours as cost-conscious shoppers say they plan to spend less on gifts than they did last year.

Kohl’s, the fourth-largest U.S. department-store chain, will open at 4 a.m. on Nov. 27 and offer more than 300 early- bird specials, including $34.99 cashmere sweaters. Toys ‘R’ Us is offering almost 50 % more of such deals than last year. Walmart is staying open all of tonight so shoppers can grab $3 pajamas and $15 Miley Cyrus jeans when they go on sale at 5 a.m.

The Wayne, New Jersey-based chain is opening at midnight tonight, five hours earlier than last year, offering 220 doorbusters compared with 150 in 2008, and has distributed a 28- page national Black Friday circular. It promised to have thousands of the Zhu Zhu Pets robot hamsters that sold out in recent months, and will be handing out 64-crayon Crayola boxes as gifts with purchases.

With unemployment at 10.2 %, price is more important to shoppers this year than selection, quality or convenience, according to the NRF.

More than a quarter of U.S. households plan to shop Friday, according to an International Council of Shopping Centers survey. Almost 18 % of those surveyed said they would shop between midnight and 4 a.m.; 36 % said they would go between 4 a.m. and 8 a.m. The council is a New York-based trade group.