Better late than never. Toyota Motor Corp. is replacing accelerator pedals on about four million recalled vehicles due to concerns over sudden acceleration. 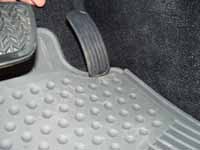 A lot of incidents, caused by accelerator problem, have been reported throughout the country. Some of them were fatal crash.

Concerns over floor mats prompted Toyota to recall about four million vehicles in September.  At the time, the company asked owners to remove their driver's side mats until a permanent solution could be found.

But Jeff Pepski of Plymouth, a victim of the pedal problem, had his doubts.  "The floor mat wasn't the cause of my incident," he said in late October.

Toyota is now taking action and isn't just replacing the floor mats.  The company plans to shorten the gas pedals by three-fourths of an inch on recalled cars starting in January, then install newly designed gas pedals starting in April.

In some recalled cars, Toyota will also install a brake override system as a precaution.  That system stops the car from acceleration if there's any pressure on the brake.

Toyota says  the override system will be standard in many models by the end of next year.Auto company says it's "very, very confident" these changes will address the acceleration issue and says it has no reason to believe there are problems with the cars' electronic control system.

KARE has contributed to the report.