Auto giant General Motors has confirmed plans to cut 9,000 jobs across Europe, saying that up to 60% will be in Germany. 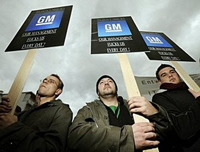 Nick Reilly, a senior official of the US car maker, met employee representatives at a meeting in Germany to go through the firm's detailed plans for the future.

During a visit to Britain last week, Mr Reilly said he believed there was scope for a "significant reduction" in the 800 job cuts threatened in the UK earlier this year under previous plans.

He stressed after the meeting in Russelsheim no final decisions have been taken but the firm is entering a period of consultation with trade unions.

Mr Reilly added he hopes to complete consultations with the unions within the next  two to three weeks, according to the Press Association' report.