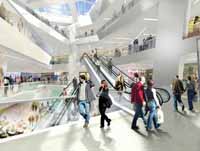 The bounce in spending represents a rebound as spending declined by a downwardly revised 0.6% in September. It also comes in the face of a 26-year high for unemployment and forecasts for a sluggish economic forecast.

The better-than-expected report helped buoy sentiment on Wall Street as the premarkets extended their gains in part on the news.

In another sign that inflation doesn’t appear to be a near-term threat to the recovery, personal consumption expenditures excluding food and energy rose 0.2% last month. Economists had forecasted a 0.1% rise.

The government also revised its September personal income estimate to reflect an increase of 0.2%, up from an unchanged reading earlier.

The increase in consumer spending could bode well for the holiday shopping season, which retailers like Macy’s (M) and Best Buy (BBY) rely on for much of their annual profits.

The spending report comes a day after the Federal Reserve said it upgraded its 2009 and 2010 forecasts for gross domestic product, according to Fox News' report.