October home resales are expected to rise to the highest level in more than two years. According to economists polled by Thomson Reuters, sales are expected to show a 1.4 percent increase to a seasonally adjusted annual rate of 5.65 million, up from 5.57 million in September. If accurate, it would be the best month for home sales since July 2007. First-time buyers, anticipating that a tax credit would soon expire, rushed to beat the clock. 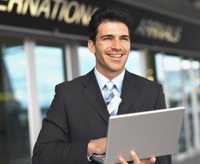 The National Association of Realtors' report is scheduled for release Monday.

The tax credit of up to $8,000 for first-time owners was originally set to run out on Nov. 30, but Congress renewed it earlier this month and broadened its reach. People who have owned their current homes for at least five years can now claim a tax credit of up to $6,500 for a home purchase. To qualify, buyers must sign a purchase agreement by April 30.

But sales are likely to drop over the winter as buyers hibernate for a few months without the looming tax credit deadline, said Pat Lashinsky, chief executive of online real estate brokerage ZipRealty Inc., The Associated Press reports.

It was also reported, the strength in home sales helped ease the market's pessimism that followed weaker data on housing starts, employment and consumer confidence over the past few weeks. The falling dollar contributed to the rally, on the expectation that a low dollar will keep interest rates low. Low rates make it cheaper for companies to borrow and investors to finance purchases of stocks and commodities.

Stocks also were helped by momentum buying, with investors buying stocks simply because the market is rising and no one wants to miss out on the rally.

Many experts predict prices will hit a new low next spring, perhaps falling another 5 to 10 percent, as more foreclosures get pushed onto the market. The government has tried to counter that trend by offering a tax incentive for first-time buyers and by keeping mortgage rates around 5 percent since the spring., The Associated Press reports.

Meanwhile, foreclosure filings surpassed 300,000 for an eighth straight month in October as rising joblessness made it tougher for homeowners to pay bills, according to RealtyTrac Inc. data.

“Prices are ridiculously low in some markets,” he said at a conference in New York on Nov. 17. “That’s not going to stay.”

Sales had reached a 4.49 million pace in January, their lowest level since comparable records began in 1999.

Purchases of existing homes rose 23.5 percent in October compared with a year earlier. The median price fell 7.1 percent from a year earlier, to $173,100, Bloomberg reports.