Nintendo Will Contribute to Black Friday

Nintendo plans to release a pair of limited-edition DSi handhelds on Black Friday which will include pre-installed software. 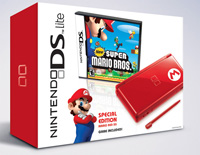 Nintendo Will Contribute to Black Friday

Each bundle will carry its own theme. A Mario package featuring a metallic blue DSi will include three DSiWare games: Mario vs. Donkey Kong: Minis March Again, Dr. Mario Express and WarioWare: Snapped. The device will also sport a Mario-themed calculator and clock.

Nintendo will also ship a bundle with white DSi "for anyone who has a passion for brain teasers," says a release from the company.

No word on what these bundles will cost, but Game Hunters has reached out to Nintendo for more details. The standard DSi sells for $170. Reported by USA Today.