Retail gasoline prices slided down on the verge of the country's busiest travel weeks, as more than 33 million people expected to leave home for the Thanksgiving holiday. 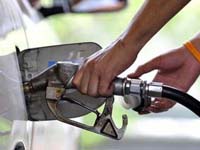 Americans are still remaining closer to home because of anxiety about the economy and demand for gasoline is weaker now than it was last year at this time.

That is telling because a gallon of gasoline then cost only $1.93 as the economic downturn unfolded in 2008.

Unlike last year, however, gas is not falling sharply and though prices fell overnight, it still cost $2.64 per gallon, according to auto club AAA, Wright Express and Oil Price Information Service.

A survey by the AAA this weekend found that the number of Americans traveling away from home for Thanksgiving will be up just 2.1 % this year from 2008.

Oil prices soared to begin the week and higher crude prices are one of the reasons why gasoline prices are at current levels.

The National Association of Realtors said home sales rose 10.1 % in October. That is the highest level in more than two years and helped push crude prices higher on expectations of increased demand.

Still, crude in storage is above normal levels for this time of year and it is the dollar that been the biggest driver behind rising oil prices.

Investors holding stronger currencies can buy more dollar-based crude when the U.S. currency falls. But the refiners that turn crude into gasoline, jet fuel and diesel are cutting back because demand is so weak.

Refiners say they can't raise the price of gasoline and jet fuel because people aren't traveling as much, but they must pay higher prices for crude because of the weak dollar.

Air travel is projected to decline 6.7 %, or 2.3 million travelers this year compared to 2.5 million in 2008, according to the Associated Press' report.