Britain's Cadbury may team up with Italian chocolatier Ferrero to avoid a purchase of shares by U.S. group Kraft, according to italian reporters. 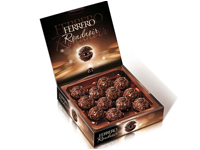 Cadbury had so far not been contacted by Ferrero but would consider any attractive offer. Analysts and traders believe that such an alliance is quite possible.

Cadbury's shares were little changed, up 0.4 % at 784.5 pence by 1502 GMT compared with the current value of Kraft's cash and share offer at 726p and many analysts suppose it may have to explore all options if it wants to extract a higher price from Kraft.

A Cadbury-Ferrero combination could be a very credible alternative to a raised Kraft bid.

Another advantage for Cadbury shareholders is that they would continue to hold shares in a high-growth confectionery group -- with a potentially retained UK listing -- rather than being paid around 50 % equity in a low-growth US-listed conglomerate.

Last week, U.S. food group Kraft took its $16.2 billion offer for Cadbury to the British company's shareholders, refusing to sweeten its price.
"A Ferrero bid could emerge in due course," said one trader. Another said that the Italian company was too small to bid on its own and would have to team up.

Ferrero, which has annual sales of 6.2 billion euros ($9.3 billion), 18 factories and over 21,600 employees worldwide is best known for its Ferrero Rocher and Kinder chocolates, Nutella spread and Tic-Tac candy.

Cadbury is the world's second-largest confectionery company after Mars-Wrigley, making brands such as Dairy Milk chocolate and Trident gum. It had full-year revenues of 5.4 billion pounds ($9.1 billion) in 2008.

Ferrero was founded in 1946 by Pietro Ferrero in Italy's northwestern province of Piedmont, and he invented Gianduja cream using local hazelnuts as an alternative to chocolate which was in short supply after the Second World War.

His son Michele, named by Forbes magazine earlier this month as the richest man in Italy, took control in 1957 and the company is now run by his sons, Pietro and Giovanni, who are chief executives and live in Belgium.

The family-owned company says it was the first Italian group after the Second World War to open overseas factories.
Reuters  has contributed to the report.