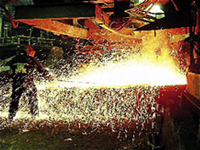 It said it expected supplies from state stocks to be flat this year at 960,000 ounces.

Norilsk last month raised its palladium output forecast for this year to 2.850 million ounces from previous estimate of 2.685-2.710 million ounces, without giving a reason.

"Although there do not seem to have been any significant shipments of palladium from Russian state stocks, we believe that 960,000 ounces of the metal, which was shipped outside Russia during 2008 is likely to be sold to investors this year," Johnson Matthey said.

Johnson Matthey said supplies of sister metal platinum from Russia were likely to decline to 745,000 ounces this year from 810,000 ounces in 2008 due to lower output by Norilsk and minor producers.

Russia is the world's second-largest platinum producer after South Africa. Besides Norilsk, which produces most platinum in the country as a by-product of other metals, several companies produce it from alluvial deposits.

The biggest of these deposits is operated by Koryakgeoldobycha, controlled by billionaire Viktor Vekselberg, and Amur, a miner owned by Moscow-based Alliance Group.

Johnson Matthey said it expected Russian rhodium supplies to decline to 65,000 ounces this year from 85,000 ounces in 2008.
Reuters has contributed to the report.