Las Vegas Sands Corp.: Hotel in Macau to Be Build After All 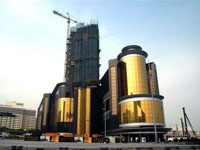 Las Vegas Sands Corp.: Hotel in Macau to Be Build After All

On September 29, 2007, Las Vegas Sands Corp.'s Sheldon Adelson announced that it will open its 2nd hotel, the Sands Macao Hotel in Macau on October. But the world financial crisis ruined the ambitious plans.

This week Sands will seek to raise more than $3.3 billion from an initial public offering of shares in its casino businesses in the southern Chinese enclave, the world's largest casino market.

About $500 million will be used to restart construction on the projects, executives said. The company plans to hire as many as 12,000 workers after 11,000 jobs were cut as a result of the suspension.

Sands' latest casino resorts are part of Chairman Sheldon Adelson's quest to turn a section of Macau known as the Cotai Strip into a Chinese version of the Las Vegas Strip with a mix of gambling, conventions, shopping, entertainment and other draws.

Sands hopes to open the first phase of the project, including two hotel towers and casino space at a cost of $2 billion, by June 2011. Ultimately, the company aspires to build still more casinos and hotels on two additional plots of land in the Cotai area to bring the total number of hotel rooms to 20,000, according to the Associated Press' report.