War Over Skype Is Over

Yesterday a legal dispute that had threatened the spin-off of Skype from Ebay was resolved. Niklas Zennstrom and Janus Friis, who had sold Skype to Ebay and quit two years before, will get a 14 per cent stake and board representation in return for dropping their legal action. 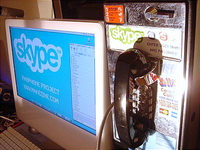 War Over Skype Is Over

In their suit against Ebay and a group of investors, including Silver Lake, Andreessen Horowitz and the Canada Pension Plan Investment Board, which had agreed to pay $1.9bn for a majority stake in the business, they had claimed infringement of the rights they still retained in the underlying technology on which Skype relies, Financial Times reports.

Meanwhile, Skype is facing some challenges. One problem is growing competition from other high-profile services, including Google Inc's (GOOG.O) Google Voice.

Another, perhaps larger, issue is that consumers are increasingly using mobile phones rather than landlines for communication. For Skype, mostly used on desktop computers, this means it must quickly make inroads into mobile.

But if Skype is to stay relevant, it will have to do so without the backing of corporate parent eBay Inc , which is selling a large stake in the service to a group of private investors. A lawsuit that threatened to sink the deal was settled on Friday.

Behind the deal is the idea that eBay can return to its central business -- an online auction and payment service -- without being distracted by managing a telephone service, Reuters reports.

It was also reported, we will never know whether the Skype founders would have won their lawsuits, and it is doubtful they could have halted the sale of Skype. EBay was prepared to claim that it was Niklas Zennstrom, one of Skype’s founders, who inextricably linked the Skype code and the Global Index while he worked for eBay. It is also not clear whether Michelangelo Volpi, the Index Ventures partner whose allegiances were at the heart of the lawsuits, really had any fiduciary obligations to Joost by early 2009, when the online video firm had so clearly failed. His employment contract was actually governed by New York state law, which gives employees plenty of leeway to seek new employment.

Nevertheless, the lawsuits aired embarrassing details and put pressure on the dealmakers and on eBay, which needed to show the stock market it could close the sale as promised.

“One hates to see the kind of litigiousness the founders practiced here rewarded so handsomely,” said Kirk O. Hanson, executive director of the Markkula Center for Applied Ethics at Santa Clara University. “Unfortunately, the time value of new technologies creates an opportunity for harassment and bullying simply by creating delay,” The New York Times reports.