GM Undermined the Company's Prestige for its Business Future

General Motors Co. CEO Fritz Henderson makes announcements to downplay great dissapontment of foreign businessmen and european employees. He said Thursday its European Opel unit will pay for most of the $3 billion it needs to restructure. 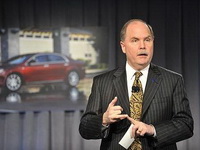 GM Undermined the Company's Prestige for its Business Future

He said Opel's cash situation has improved so it could be the primary funding source for the restructuring.

Henderson said GM also could charge Opel lower royalties for GM technology, and it will seek aid from European governments.

The automaker has said it would cut about the same number of jobs as Magna would have, or about 10,500.   GM soon will appoint an Opel transition team, Henderson said. He conceded that GM has a lot of work to do to fix its relationship with European labor unions.

At the same time, Henderson said GM can fund its global business from the $50 billion it has received from the U.S. government.

The company was founded on 21 January 1863, began making automobiles in 1899, and was acquired by General Motors in 1929. As part of GM Europe, Opel is GM's largest European brand and, along with Vauxhall Motors in the UK, it forms GM's core European business.

In early 2009, the future of Opel was thrown into uncertainty as the global financial crisis drove GM towards bankruptcy. New Opel (Opel plus Vauxhall, minus Saab), is presently controlled by a trustee, with a controlling board made up of representatives from GM, employees and the German Government; the company was subject to a bidding process.

On 10th September 2009, it was announced that Magna, a Canadian automobile parts manufacturer, and Sberbank, a Russian bank, would buy a majority stake (55%) in its European Opel/Vauxhall operations. GM would own 35% of Opel; while Opel employees will own 10%. The agreement would have kept Opel/Vauxhall a fully integrated part of GM’s global product development organization.

However, on 3 November 2009, the GM board called off the Magna deal after coming to the conclusion that Opel was crucial to GM's global strategy. On the other hand, this resulted in anger among German officials and Opel employees due to the fact that GM will now have to layoff about 20 % of Opel’s workforce for restructuring Opel.