Toyota to Withdraw from Formula One Racing

Toyota is pulling out of Formula One racing, the world's largest automaker announcing Wednesday that it needs to cut costs and focus on its core business. For the first time in eight years, there'll be no Japanese constructor on the F1 grid in 2010. 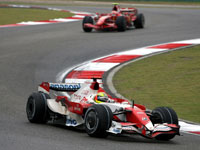 Toyota to Withdraw from Formula One Racing

"Based on the current economic environment, we realize we have no choice but to withdraw from Formula One," Toyota president Akio Toyoda said at a news conference. "This has been a very painful decision for the company."

Toyota officials called the withdrawal from F1 complete, making a return to the sport when and if conditions improve unlikely, The Associated Press reports.

In a press release, Toyota said it remained dedicated to competing at the top of motor sports, but because of the abrupt economic changes that started last year it was withdrawing from the circuit.

Toyota leaves F1 having compiled 13 podium and 87 point finishes over eight seasons since 2002. The company said it intended to find a solution for parties who would be affected by the decision, according to MiamiHerald.com.

Toyota follows Honda, which quit F1 last December, and BMW which entered its final race on Nov. 1 in Abu Dhabi. On Nov 2. Japanese tire maker Bridgestone said it would pull also out of the sport, saving $100 million a year.

While long rumored, Toyota’s decision to quit wasn’t a certainty. For one thing, since becoming CEO in June, Toyoda, a keen racer, has talked of giving Toyota a sportier image. At last month’s Tokyo Motor Show, Toyoda showed the $375,000 Lexus LFA supercar, which he a hand in developing, and the rear-wheel driver FT-86 sports concept, BusinessWeek reports.