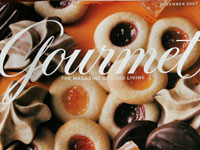 As news of the closure spread, one refrain spread fast — the company's decision to retain the more recipe-driven Bon Appetit was indicative of Gourmet being out of touch with how Americans eat.

Ruth  Reichl, an American food writer, the editor-in-chief of Gourmet magazine, co-producer of PBS's Gourmet's Diary of a Foodie, and culinary editor for the Modern Library, disputes that, Gourmet's circulation — around 980,000 — was up. It was ad pages that were down. That makes Reichl feel the decision was an economic one, not based on reader disaffection.

Magazine consultants have said Bon Appetit likely survived because advertisers have moved toward food titles that reflect the more affordable sensibility it has.

"Bon Appetit has a larger class within the mass audience where Gourmet has become more of a class by itself," said Samir Husni, director of the Magazine Innovation Center at the University of Mississippi, School of Journalism.

"I don't know what will happen," she said. "We pioneered writing about farmers and issues from the field and we wrote about genetic engineering when nobody else was touching that. We wrote about trans fat and it was important for me to do that. Whether other editors will decide to start doing that, I don't know."

News of the closing came as a shock to the staff and a brusque interruption to the book tour. Reichl is postponing some of the dates, including the next stop in St. Louis.

An accomplished memoirist — "Tender at the Bone," "Garlic and Sapphires: The Secret Life of a Critic in Disguise" — she has said she plans to write a book about her years at Conde Nast.

But in the meantime she will continue promoting the cookbook — more than 1,000 pages long and 5 years in the making. "I love this book and it deserves its best shot and people deserve to have it," she said.

The show consists of 10 half-hour episodes and features Reichl traveling to cooking schools around the world with actor friends, including Frances McDormand and Dianne Wiest.

The idea is to experience other cultures in a visceral way. Countries visited include China, Brazil, Morocco and, of course, the United States. "There's an incredible fish episode from Seattle."

The episodes have been shot, but Reichl is still working on editing and voiceovers.

"I'm totally committed to that show," she said.

She's committed to the book, too, which she says has "everything that we could put into it that could be helpful to a modern cook."

"It's filled with what we think is the antidote to the fast-food culture that's developing in America," she said. "Our mission was to get people cooking again. Cooking isn't hard. The big misconception that people in America have is cooking is time consuming."

Since the closing was announced, Reichl said she's been touched by an outpouring of support from friends and strangers. "I think all of us, the entire staff, has felt how beloved the magazine was and the incredible support from people, literally all over the world."