In U.K. new businesses would be freed of tax burden for job creation under Conservative proposals announced today. 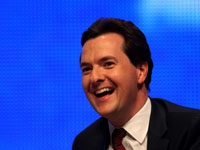 George Osborne told the Tory party conference in Manchester that 60,000 jobs would be created by the scheme which is designed to encourage investment in new ventures.

The Shadow Chancellor said that any employers creating new positions would not have to pay National Insurance contributions for the first two years of a Conservative government. He estimated that axing the levy worth 12.8 % of an employee’s salary would cost the Government around £250million a year.

He said that investors would be welcome under Tory rule. “We will send a message loud and clear that this country is open for business,” he said. “Invest here, set up your business here, come and make your enterprise here and we will support you.”

Mr Osborne said the tax cut would be funded by savings to be announced during the remainder of the conference.

“This is just another example of the Conservatives being the party of jobs at a time when Labour are the party of mass unemployment,” he said.

Aides said that the exemption would apply to the first ten employees hired by a business during its first year, up to the upper earning limit of £844 a week per employee, or about £44,000 a year. For a new small business with ten employees on an average salary of £25,000, Mr Osborne calculates this could save up to £25,000 a year at current tax rates.

The proposal was welcomed by the Federation of Small Businesses, which said: “Since 2002, small firms have created over 80 % of all new jobs. This proposal will help to create and grow more small businesses that will serve as a catalyst for economic recovery.

But Yvette Cooper, the Work and Pensions Secretary, dismissed the Conservative welfare-to-work proposals: “This is a carefully packaged con. The Tories still want to make cuts in a recession that would destroy jobs and, according to respected economists, would actually push unemployment up to five million.

“They are simply rehashing Labour policies without the investment needed to make them work. The Tories don’t understand that you can’t get people from welfare into work if you destroy the jobs for them to go to.”

Times Online  contributed to the report.