A report that the service sector grew for the first time in more than a year gave investors a confidence buoy up  and sent stocks moderately higher. 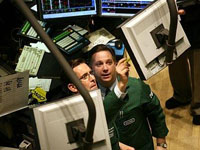 The Institute for Supply Management said Monday its service index rose to 50.9 in September from 48.4 in August.

The index tracks more than 80 % of the country's economic activity and hasn't grown since August 2008.

A measure of prices paid fell to 48.8 from 63.1 in August. That signals companies could be having a harder time holding prices in place as consumers struggle.

The report follows a two-week slide in stocks that came as report on areas like manufacturing and consumer sentiment fell short of expectations. Stocks have fallen in seven of the past eight days.

Thomas J. Lee, chief U.S. equity strategist at J.P. Morgan, said the improvement in the service index is encouraging because it could help boost confidence, which is necessary for a recovery to be sustained.

Lee said the market's two-week drop is a healthy sign of caution after stocks rose for seven months off of 12-year lows in March. He also said the mixed economic readings aren't surprising and don't mean the rally is over as he warns that "no recovery is going to be linear and smooth" .

A disappointing employment report Friday shook investors' confidence. The Labor Department said employers cut more jobs in September than in August. Economists had expected cuts would decrease. A drop in unemployment is considered vital to a sustained recovery.

Investors could begin to get a better sense of the health of the economy on Wednesday when quarterly earnings reports begin to arrive. Aluminum maker and Dow component Alcoa Inc. kicks off earnings season, and investors will be looking for signs of growth to ease recent concerns about the strength of a rebound.

Companies were able to mostly beat modest profit expectations in the second quarter primarily because of cost-cutting, including job cuts. Now traders will be looking for signs of growth in revenue to sustain improved earnings.

Bond prices rose, sending the yield on the benchmark 10-year Treasury note down to 3.19 percent from 3.22 percent late Friday.

The dollar was mixed against other currencies, while gold prices rose.

About four stocks rose for every one that fell on the New York Stock Exchange. Volume came to 311.6 million shares compared with 377.9 million shares traded at the same point Friday.