McDonald's Corp.'s  same-store sales rose 2.2% in August, with slowing increase in the U.S. highlighting the fast-food chain's sensitivity to high unemployment and a fierce discounting war. 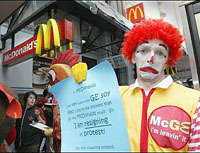 Same-store sales rose 1.7% in the U.S., less than analysts had expected. McDonald's other regions faced tough year-ago comparisons, but Europe outperformed still, with same-store sales up 3.5% in August. Sales fell 0.5% in the Asia/Pacific, Middle East and Africa region, with China and Japan market weighing on results.

Shares fell 2.1% premarket to $55. The stock through Tuesday's close was down 9.6% this year after being only one of two Dow industrial components to rise in 2008.

Overall U.S. unemployment of 9.7% is likely taking a bite out of McDonald's robust breakfast business, a meal largely driven by habit. Fewer commuters mean fewer customers. Also, even higher joblessness among teenage workers didn't give the chain its usual summertime lift it gets from that demographic, Oppenheimer & Co. analyst Matthew DiFrisco said.

Unemployment levels are pinching the broader dining industry, and McDonald's main competitors are responding with discounts and new products. Burger King Holdings Inc. (BKC) is pushing a $1 double-cheeseburger with coupons and to hone in on $1 products in upcoming ads, while Wendy's/Arby's Group Inc. (WEN) has gotten a lift from new "Boneless Wings."

McDonald's has instead focused on premium new products like Angus Third Pounders and its McCafe coffee line, as well as core menu items like Big Macs, which may have caused McDonald's to cede some value-seeking customers elsewhere.

Europe strength was admirable given McDonald's posted an 11.6% gain last year. U.K., France and Russia helped drive performance in the region, according to CNN.Money report.