The euro rose against the dollar and the yen on Tuesday, recovering from two-week lows after a surprisingly strong poll of German investor sentiment raised some optimism about the euro zone economy. 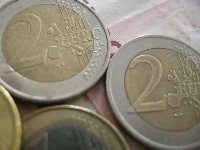 A recovery in European share prices from steep losses the previous day also helped to boost currencies considered to be higher risk which had suffered on Monday. As a result, the dollar and the yen fell across the board.

The ZEW Center for Economic Research in Mannheim said its monthly index, which measures investors' outlook for the next six months, rose to 56.1 points in August from 39.5 points in July — well above the historical average of 26.5 points.

"At the same time, investors have become more positive on the current economic situation." , AFP reports.