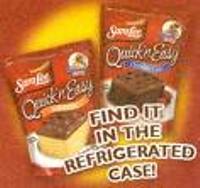 Excluding impairment charges of $207 million at its Spanish bakery business and $61 million in other charges, earnings per share were 29 cents.

Excluding one-time items, earnings were 29 cents a share, compared with the analysts' average forecast of 24 cents, according to Reuters Estimates.

For fiscal 2010, the company forecast earnings of $1.03 to $1.09 a share, including a 19-cent contingency payment related to a tobacco business it sold in fiscal 1999 , Reuters reports.