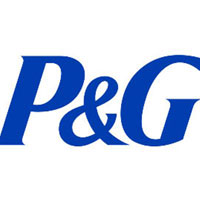 Net income for the period ended June 30 dropped to $2.47 billion, or 80 cents share, from $3.02 billion, or 92 cents, the Cincinnati-based company said in a statement distributed by PR Newswire. Sales fell 11 percent to $18.7 billion, it said, Bloomberg reports.

The company still forecast earnings of $3.65 to $3.80 per share from continuing operations this year. It now expects to feel less of a hit from currency fluctuations on its sales, Reuters reports.

In the meantime, The Procter & Gamble Co. and National Football League are teaming up in a major new sponsorship deal.

The big consumer products company says four of its brands, including Old Spice deodorant and Gillette shavers, will become "official products" of NFL locker rooms, and eight others can carry the NFL logo in retail marketing.

The deal also gives P&G marketing rights for the Super Bowl, NFL.com online and the NFL Network on television.

Details of the deal weren't available in advance of an announcement set for later Wednesday, The Associated Press reports.