The subprime mortgage crisis domino that hit the credit market has shaken the student loan business as well. Nearly 50 student lenders -- accounting for an estimated 12 percent of the federally backed student loan market -- have stopped making government guaranteed loans, either temporarily or permanently, in recent months. 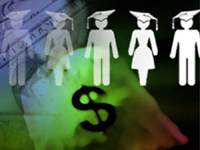 The situation is being examined at a hearing of the Senate Banking Committee on Tuesday morning.

The major federal student loan program provides an estimated $50 billion in loans to 6.4 million students each academic year. Interest rates on federally guaranteed loans are capped at 6.8 percent, unlike private student loans -- whose rates are unregulated and can reach as high as 20 percent.

On Friday, Sallie Mae, the nation's largest student lender, said it would stop offering consolidation loans for the lower-cost federal loans, saying that line of business had become unprofitable. The federal consolidation loans, which can be used by graduates to combine several federal loans into one to secure lower interest rates and monthly payments, accounted for nearly 70 percent of Sallie Mae's government-backed student loans last year.

John Remondi, the chief financial officer of Reston, Va.-based Sallie Mae, formally known as SLM Corp., is among those set to testify at Tuesday's hearing.

Kanjorksi's bill would permit the 12 regional banks that make up the Federal Home Loan Bank system to invest their surplus funds in securities backed by student loans and to accept such securities as collateral. The banks also would be able to make money available to the banks and thrifts in their regions for student loans.

Another House bill, sponsored by Rep. George Miller, D-Calif., was unanimously adopted last Wednesday and sent to the House floor by the Education Committee, which he heads. It would give the Education Department temporary authority to buy up loans from student lenders to ensure their access to capital. In the Senate, Sen. Edward Kennedy, D-Mass., chairman of the committee dealing with education, has proposed similar legislation.