The biggest U.S. public pension fund would be in charge of individual retirement accounts, best known as IRAs, for private-sector employees under a bill unveiled on Tuesday by California Gov. Arnold Schwarzenegger and a top state lawmaker. 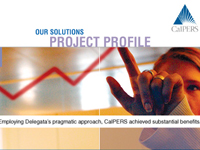 The bill aims to provide "small-dollar" investors, without retirement plans and who can not afford to buy into mutual funds or to invest through brokerages, a way to invest for retirement, according to de Leon spokesman Dan Reeves.

Employers who do not offer retirement plans also could use the new program.

Calpers spokesman Brad Pacheco said pension fund staff are reviewing the bill as it would open the door to the retirement system operating defined-contribution retirement plans in addition to its traditional defined-benefit pensions.

State unions whose members also are Calpers members prefer defined-benefit pensions. Calpers staff will put together an analysis of the plan over the next three to four weeks to submit to the fund's board, Pacheco said.

Schwarzenegger, a Republican, applauded the bill by de Leon, a Democrat.

"This legislation will help make businesses more competitive, without costing them anything, and will help employees save for their retirement, without costing taxpayers anything either," Schwarzenegger said in a statement. "It is a great example of doing 'more with less' to help California businesses and hard-working employees," he added.

The California Public Employees' Retirement System provides pension fund, healthcare and other retirement services for approximately 1.5 million California public employees. As of October 2007, it owns $254.8 billion worth of stock, bonds, funds, private equity and real estate. It is the largest pension fund in the United States. Calpers provides benefits to all state government employees and, by contract, to local agency and school employees. Many California counties and large cities have their own retirement system.