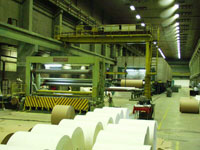 Chief Executive Jouko Karvinen, who last year started a major cost-cutting program with hundreds of layoffs, described the quarter as "one of the most challenging in the recent history" of the company. He cautioned that competition would remain tough.

"The fourth quarter's profit deterioration, which was mainly due to wood products and certain one-time functional costs, meant we could not stay on our path of year-on-year improvement," Karvinen said.

The forest products group gave a profit warning last month and said it will continue to cut costs and improve margins. A depreciation of the U.S. dollar and British pound hit operating profit by 20 million euros (29 million dollars) in the quarter, and the company warned that unfavorable exchange rates would continue to make markets outside Europe competitive.

"The economic outlook is uncertain in Europe and globally. The general outlook for wood products demand remains depressed, and prices are likely to decline further," the company said. "Judging by the current outlook, the already announced production curtailments will continue at least into the second quarter of 2008."

Last month, Stora Enso announced plans to lay off more than 2,000 people and close three mills in Finland, sparking widespread strikes in the country and fierce debates in Parliament over government ownership. The Finnish state is a major shareholder with some 10% of the stock.

Karvinen warned of more cutbacks within the next few months.

"A real threat to the future of the whole forest products industry in Finland is the impending increases in duties on wood exported from Russia," Karvinen said, adding that Stora Enso was planning "capacity reductions and some investments in order to minimize the effects" on profitability and layoffs.

Stora Enso is one of the world's largest forest product companies making magazine paper, newsprint, fine paper, pulp and packaging boards. It employs 38,000 people - 6,000 less than a year ago - in more than 40 countries.