By Anastasia Tomazhenkova: Weyerhaeuser Co announced that its fourth-quarter profit fell as its wood products business was hurt by the slump in the U.S. housing market, though adjusted earnings still beat Wall Street expectations. 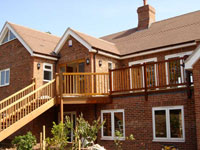 Analysts polled by Thomson Financial had expected a profit of 35 cents a share excluding items, but forecast higher revenue of 4.13 billion dollars.

Revenues fell 18% to 3.94 billion dollars on declining sales from its wood products and timberlands business. Analysts, on average had looked for revenues of 4.12 billion dollars.

Chief Executive Steven Rogel called 2007 a "challenging year" for the paper and wood products industry. Paper demand has been gradually weakened by a shift to the Internet for news, billing, mailing and other information that was once communicated on paper. The housing downturn has made it more difficult for the industry to maintain profits.

"Despite difficult market conditions, which we expect to continue through 2008, Weyerhaeuser remains focused on managing through the downturn and positioning the company to take full advantage of stronger markets once conditions improve," said Rogel.

Shares of Weyerhaeuser have fallen about 12% over the last three months, compared with an 11% decline in the Standard & Poor's Paper and Forest Products Index.