US economy to avoid recession and keep pace later in 2008

The U.S. economy will most likely be able to avoid recession. Interest rate cuts would help the economy pick up pace later this year, Janet Yellen, the President of San Francisco’s Federal Reserve Bank said. 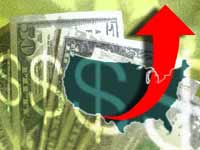 US economy to avoid recession and keep pace later in 2008

“The Fed's policy actions should help to promote a pickup in growth over time. I consider it most probable that the U.S. economy will experience slow growth, and not outright recession, in coming quarters,” Yellen said.

The growth of the U.S. economy may turn out to be slower that expected, which is a factor that policy makers should be aware of, Yellen said in her speech in Honolulu.

Investors anticipate the central bank will lower its benchmark interest rate by a further half point by mid-March after five reductions to 3 percent since September.

In macroeconomics, a recession is a decline in a country's gross domestic product (GDP), or negative real economic growth, for two or more successive quarters of a year.

An alternative, less accepted definition of recession is a downward trend in the rate of actual GDP growth as promoted by the business-cycle dating committee of the National Bureau of Economic Research. That private organization defines a recession more ambiguously as "a significant decline in economic activity spread across the economy, lasting more than a few months." A recession may involve simultaneous declines in coincident measures of overall economic activity such as employment, investment, and corporate profits. Recessions may be associated with falling prices (deflation), or, alternatively, sharply rising prices (inflation) in a process known as stagflation. A severe or long recession is referred to as an economic depression. A devastating breakdown of an economy (essentially, a severe depression, or a hyperinflation, depending on the circumstances) is called economic collapse. Newspaper columnist Sidney J. Harris distinguished terms this way: "a recession is when your neighbor loses his job; a depression is when you lose your job."

Market-oriented economies are characterized by economic driving cycles, but actual recessions do not always result in macroeconomic sub-financial declines in gross domestic product. There is much debate, sometimes ideologically motivated, as to whether government intervention smoothes the cycle, exaggerates it, or even creates it.