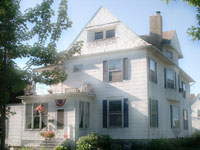 Analysts surveyed by Thomson Financial expected a loss of 25 cents a share on revenue of 1.62 billion dollars.