By Anastasia Tomazhenkova: A global American beverage and snack company PepsiCo Inc. announced its fourth-quarter profit fell 31% from results a year ago that included a tax benefit from a settlement with the Internal Revenue Service. 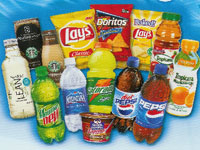 Excluding certain one-time items, the company claimed it earned 80 cents a share in the latest quarter versus 74 cents a share a year earlier, putting it in line with analyst expectations. Results from the year-earlier quarter included a 128 million dollars tax benefit from an IRS settlement that boosted earnings a share by 36 cents that year. Plant closings and a divisional reorganization cost 4 cents a share in the most recent quarter.

Analysts polled by Thomson Financial, who normally exclude one-time charges, had predicted earnings of 79 cents a share on revenue of 11.56 billion dollars.

PepsiCo expected 3% to 5% volume growth, mid- to high-single digit revenue growth and full-year earnings a share of 3.72 dollars in 2008.

Analyst Bill Pecoriello of Morgan Stanley told investors the quarterly results were in line with expectations, and that the company's stock could be better off now that the company has confirmed its outlook for the year.

"The market was certainly worried the guidance could have been lower as indicated by recent share performance," Pecoriello wrote in a research note.