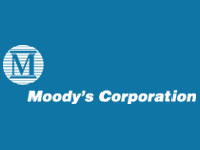 Moody's fourth-quarter net income fell 54% to 127.3 million dollars, or 49 cents per share, from 278.6 million dollars, or 97 cents, a year earlier. The company said the first half of 2008 will be ``weak'' after a collapse in new bond sales reduced demand for rankings.

Analysts polled by Thomson Financial, on average, had been projecting earnings of 47 cents per share on revenue of 482 million dollars.

During the fourth quarter, Moody's repurchased 7.7 million shares at a total cost of 311.4 million dollars and issued 800,000 shares of stock under stock-based compensation plans.

Moody's expects full-year 2008 revenue to decline in the low double-digit percent range from 2007, with earnings ranging from 2.17 dollars to 2.25 dollars per share.