By Margarita Snegireva. Mazda Motor Corp. announced that its net profit grew 7.1% in the third quarter, as it sold more vehicles in emerging markets as well as in Europe and North America. 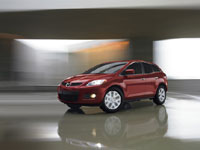 For the full business year ending in March, the auto maker maintained its forecast for a net profit of ¥85 billion, operating profit of ¥160 billion and sales of ¥3.32 trillion.

Mazda Motor Corporation is a Japanese automotive manufacturer based in Hiroshima, Japan.

As of 2006, the company is expected to produce 1.25 million vehicles per year, with sales evenly divided among Japan, Europe, Australia, and North America, followed by Latin America.

The name of the company is supposedly derived from Ahura Mazda, the transcendental god of Zoroastrianism. It is also said that Mazda coincides with the anglicized pronunciation of the founder's name, Jujiro Matsuda, who was interested in spirituality, and chose to rename it in honor of both his family and the Zoroastrians. Mazda means "great wisdom" in the Iranian Avestan language. However, in Japanese, the company has always been pronounced and spelled as "Matsuda" leading many to believe that Mazda is really just a poorly anglicized version of the founder's name. (It comes to English by way of German, Mazda being pronounced Mats'da in German.)