By Anastasia Tomazhenkova: Semiconductor maker Freescale Semiconductor Inc claimed that the company would purchase SigmaTel Inc, which makes chips for MP3 players, for about $110 million in cash to meet increased demand for consumer electronics devices. 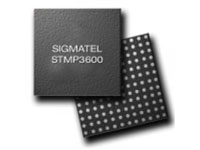 Austin, Texas-based SigmaTel, which competes with China-based Actions Semiconductor Co Ltd, is a provider of analog intensive and mixed-signal integrated circuits for the digital multimedia market.

The 3 dollars per share offer represents a premium of about 68 percent, as SigmaTel shares closed at $1.79 on Friday, and surged $1.09, or 61 percent, to 2.88 dollars in premarket trading. The deal is expected to close in the second quarter.

The deal is valued at about $108.1 million based on 36 million shares outstanding as of Oct. 31. Freescale values the deal at about $110 million.

The agreement contains a "go-shop" provision through March 4, during which SigmaTel can solicit and engage in talks on potential competing proposals, SigmaTel said.

Freescale is a former Motorola Inc unit taken private in 2006. Freescale was bought by a private equity consortium led by Blackstone Group for 17.6 billion dollars.

Subject to customary closing conditions, including shareholder and regulatory approval, the acquisition is expected to close in the second quarter of 2008.