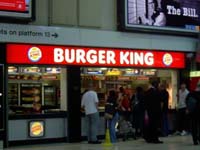 Analysts on average were looking for earnings excluding items of 33 cents per share on revenue of 598.7 million dollars.

"We succeeded in a challenging macroenvironment with marketing initiatives that drove increased sales and traffic," Chidsey said in a statement.

McDonald's on Monday reported that its U.S. same-stores were flat in December, the lowest monthly level in nearly five years, due in part to severe winter weather.