By Anastasia Tomazhenkova: The credit card network MasterCard Inc. reported that its fourth-quarter earnings rose more than seven times, due to additional sales of the company's investment in a Brazilian company. 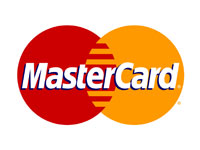 Its shares rose about 3 percent in premarket trading.

The latest results include an after-tax gain of 185 million dollars from sales of the company's stake in Redecard SA, a company that signs up merchants in Brazil. Excluding that gain, profit came to 89 cents per share.