By Margarita Snegireva. Maryland's largest power producer Constellation Energy Group reported that it will sue the state state in federal court to cancel almost $400 million in credits it was pressured by lawmakers two years ago into giving electricity customers. 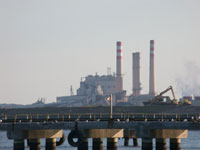 The company said the suit was prompted by an escalating battle with state utility regulators over the terms of a 1999 law to deregulate electricity markets. Constellation officials have accused the Public Service Commission of politicizing concerns about deregulation and jeopardizing the company's plans to build additional power plants in the state, including a third reactor at the Calvert Cliffs nuclear plant in Southern Maryland.