Russia’s finance minister said Wednesday that the country’s 2007 economic growth estimated at 7.8 percent and projected annual growth of 6.5-7 percent for the next three years. 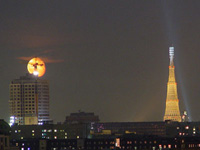 Alexei Kudrin boasted to an investment forum that the nation is becoming an international economic power.

He said the overall investment increased by 21 percent in 2007.

Such good results were largely driven by high world oil and gas prices.

The country has set aside huge sums for investment and to stabilize the economy in case of a commodities downturn.

On January 1, 2004, the Stabilization fund of the Russian Federation was established by the Government of Russia as a part of the federal budget to balance it if oil price falls. Now the Stabilization fund of the Russian Federation is being modernized. The Stabilization Fund will be divided into two parts on February 1, 2008. The first part will become a reserve fund equal to 10 percent of GDP (which is about $100 billion now), and will be invested in a similar way as the The Stabilization Fund. The second part will be turned into the the National Prosperity Fund of Russian Federation. Deputy Finance Minister Sergei Storchak estimates it will reach 600-700 billion rubles by February 1, 2008. The the National Prosperity Fund is to be invested into more risky instruments, including the shares of foreign companies.