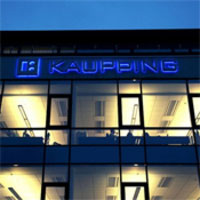 A planned rights offer in the first quarter of 2008 has been canceled, the Reykjavik-based company said today in a statement distributed by Hugin. NIBC Chief Executive Officer Michael Enthoven and Chief Risk Officer Juergen Stegman offered to step down, the Dutch bank said in a separate statement.

Kaupthing agreed in August to buy The Hague-based NIBC, which had canceled an initial public offering in March and pulled a bond sale in July, from a group led by J.C. Flowers & Co. NIBC said that month it lost at least 137 million euros ($199 million) on U.S. subprime mortgage bets.

Kaupthing Bank is an Icelandic bank, headquartered in Reykjavík, Iceland. It was formed by the merger of Kaupthing and Búnaðarbanki Íslands in 2003 and is the largest bank in Iceland.

The bank employs over 2,500 people and maintains 36 retail branches in Iceland.