Germany seems to betray its favorite beverage in favor of juices and bottled water. 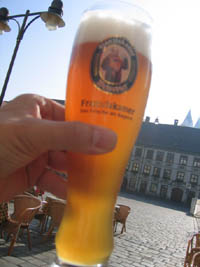 The Federal Statistics Office noticed that the reason was a high demand for fruit juices, soft drinks and other nonalcoholic beverages.

Some Germans blame rainy summer and some say that tastes really shifted.

German beer is highly diverse and an important part of Germany's culture. There are around 1,300 breweries in Germany , more than in any other country except the United States which has 1,500. The German beer market is somewhat sheltered from the rest of the world beer market by the German brewers' adherence to the Bavarian Reinheitsgebot (purity requirement) dating from 1516 (and most recently updated in the Vorläufiges Biergesetz of 1993), according to which the only allowed ingredients of beer are water, hops and barley-malt.

This law also requires that beers not using only barley-malt (such as wheat and rye) must be top-fermented. Many breweries worldwide adopted the Reinheitsgebot for their own beers. After its discovery, yeast became the fourth legal ingredient, though for top-fermenting beers the use of sugar is also permitted. In part because of this law (which since 1988 has not applied to imported beer, but is still compulsory for German brewers), beers from Germany have a reputation for high quality. The Germans are behind only the Czechs and the Irish in their per capita consumption of beer.