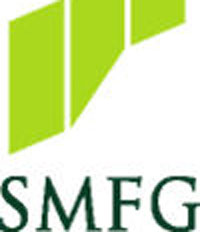 While SMFG and other Japanese lenders have avoided the heavy subprime losses that hit Merrill Lynch and other overseas rivals, they haven't escaped unscathed.

Sumitomo Mitsui Financial Group, or SMFG, is a Japanese financial group, the third largest bank in Japan and one of the world's largest banks with asset of $1.3 trillion US dollars.

October 2006 Reached an agreement to pursue strategic joint business with the Sumitomo Corporation group in leasing and auto leasing businesses.