McDonald's Corp. reported that its fourth-quarter profit rose 3 percent due to income tax benefits and another period of strong sales at stores open at least a year. 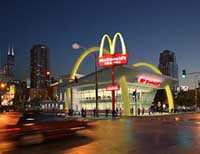 McDonald's restaurants are found in 120 countries and territories around the world and serve nearly 54 million customers each day. The company also operates other restaurant brands, such as Piles Café, and has a minority stake in Pret a Manger. The company owned a majority stake in Chipotle Mexican Grill until completing its divestment in October 2006. Until December 2003, it also owned Donatos Pizza. On August 27, 2007 , McDonald's sold Boston Market to Sun Capital Partners. It also has a subsidiary, Redbox, which started in 2003 as 18-foot (5.5 m) wide automated convenience stores, but as of 2005, has focused on DVD rental machines.