By Anastasia Tomazhenkova: Chocolate maker Cadbury Schweppes PLC intends to guarantee a long-term supply of the most important ingredient used in its candies, cocoa. That is why the company plans to spend millions over the next few years to boost cocoa yields and to improve the lives of cocoa farmers. 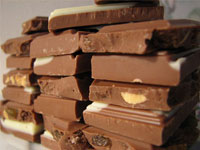 The investment will affect an estimated 1 million cocoa farmers located primarily in Ghana, India, Indonesia and the Caribbean.

Research by Sussex University in England, which was funded by the candy maker, has shown that the average production for a cocoa farmer has dropped to only 40 percent of potential yield and that cocoa farming has become less attractive to the next potential generation of farmers, according to a statement by the company.

The money Cadbury plans to spend on schools, libraries and wells is intended to attract the next generation to cocoa farming.

"In Ghana, there is a phrase 'Coco obatanpa,' which means 'Cocoa is a good parent. It looks after you,"' James Boateng, the managing director of Cadbury Ghana, said in a statement. "We hope with this initiative, Cadbury and our partners can be a good parent to cocoa," he said.

"This program will encourage the next generation to be interested in cocoa production," said Daouda Toure, the local representative of the United Nations Development Program, which is working with Cadbury on the effort.

Individual cocoa farmers are at the mercy of volatile world markets. The price can vary from 945 dollars to 5,672 dollars per ton, in the space of just a few years. While investors trading in cacao can dump shares at will, individual cocoa farmers cannot increase production or abandon trees very quickly. When cocoa prices drop, farmers in West Africa sometimes cut costs by using slave labor. It has been alleged that an estimated 90% of cocoa farms in Côte d'Ivoire have used some form of slave labor in order to remain viable. According to the World Cocoa Foundation, some 50 million people around the world depend on cocoa as a source of livelihood.