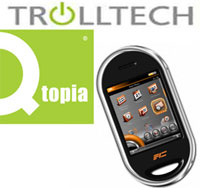 Nokia said on Monday it would offer 16 crowns for each share in Norway's software firm, compared with Trolltech shares closing price of 10 crowns on Friday.

Trolltech (formerly known as Quasar Technologies) is a computer software company from Oslo, Norway. They provide software development platforms and frameworks, as well as expert consulting services. Their flagship product is Qt, a multi-platform C++ Graphical User Interfaces (GUI) framework which also includes packages such as data structures and a networking library. The popular free Unix desktop environment KDE uses Trolltech's Qt library. Trolltech also employs several KDE developers. Trolltech was founded by Eirik Chambe-Eng and Haavard Nord in 1994. They started writing Qt in 1991, and since then Qt has steadily expanded and improved.

In 2001 Trolltech introduced Qtopia which is based on Qt. Qtopia is an application platform for Linux-based devices such as mobile phones, portable media players and home media. It is also used in many non-consumer products such as medical instruments and industrial devices. Qtopia Phone Edition was released in 2004, and their Greenphone smartphone is based on this platform.

Trolltech completed an IPO on the Oslo Stock Exchange in July, 2006.

On January 28th 2008, Nokia announced that they have entered into an agreement that Nokia will make a public voluntary tender offer to acquire Trolltech