Lonmin lowers its sales target for fiscal 2008 by 4.4 percent

By Margarita Snegireva. Lonmin Plc, the world's third- biggest platinum producer, cut its sales target for fiscal 2008 by 4.4 percent and said there will be a further reduction if power cuts and safety stoppages increase. 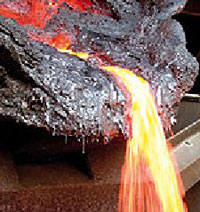 Lonmin lowers its sales target for fiscal 2008 by 4.4 percent

The target was lowered to about 860,000 ounces of platinum after accidents and labor problems including a strike cost more than 20,000 ounces in the first quarter, London-based Lonmin said today in a statement distributed by the Regulatory News Service. Lonmin said Oct. 25 its target was 900,000 ounces.

Lonmin plc , formerly Lonrho plc, was incorporated in the United Kingdom on 13 May 1909 as the London and Rhodesian Mining Company Limited.

Tiny Rowland was finally ejected from Lonrho in October 1993 after a boardroom tussle with director Dieter Bock. However, Rowland's parting shot was to get the board to appoint his nominee, Sir John Leahy, to succeed him as chairman.

Two months before Rowland's death (on July 26, 1998) the assets of Lonrho were demerged. Two publicly listed companies, Lonrho plc and Lonrho Africa plc were created – the former retaining all the non-African businesses and mining assets. In 1999 Lonrho plc was renamed as Lonmin plc and a new era as a focused mining company began. Since then it has divested itself of all non-core assets.