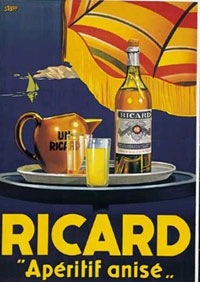 Operating profit will advance 12 percent, more than its prior forecast of 10 percent, the Paris-based company said today in a statement. Sales climbed 5.2 percent to 2.16 billion euros ($3.2 billion) in the three months through December from 2.05 billion euros a year earlier, beating the 2.09 billion-euro median estimate of eight analysts surveyed by Bloomberg.

Pernod Ricard is a French company that produces alcoholic beverages. The company's most famous products, Pernod Anise and Ricard Pastis, are both pastis, and often referred to as simply Ricard or Pernod. The company also produces several other types of pastis.

Reborn from the Pernod Fils company as a producer of pastis following the ban on absinthe, it is now a worldwide conglomerate. It owns the Austin, Nichols company (maker of Wild Turkey whiskies) and the alcoholic beverage division of the former Seagram corporation, among many other holdings. In 2005, the company acquired British-based international competitor Allied Domecq plc. This acquisition made it one of the world's largest beverage groups, behind only Diageo.