Will Toyota leave behind General Motors in 2008?

By Anastasia Tomazhenkova: General Motors Corp. sold 9,369,524 vehicles worldwide last year, up 3 percent from 2006 but putting it into a virtual dead heat with fast-rising Toyota Motor Corp. for the 2007 global sales crown. 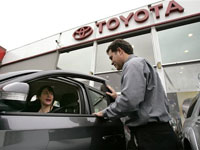 Will Toyota leave behind General Motors in 2008?

Early January, Toyota reported global sales of 9.37 million vehicles, but the company did not release a number down to the last vehicle sold, leaving the sales race too close to call.

"This is the kind of emerging market growth that fuels our global performance," Middlebrook said in a statement. "Customers are responding to our fuel-efficient and dynamically-designed product lineup around the world."

GM said 2007 sales were the second best global total in the company's 100-year history and marked the third consecutive time, and fourth time ever, that GM sold more than 9 million vehicles a year.

Toyota's share of the U.S. market has more than doubled since 1990, when it controlled only 7.5 percent of the market with just over 1 million in sales, according to Ward's AutoInfoBank. Its sales have grown briskly in recent years, sometimes by double digits, as people bought its smaller, fuel efficient cars with a reputation for reliability. By 2007, Toyota controlled 16.3 percent of the U.S. market, selling 2.6 million vehicles.

GM, while still the U.S. sales leader, has seen its U.S. market share drop dramatically since 1990, when it controlled about 35 percent by selling nearly 5 million vehicles. Last year GM's share was roughly 23.8 percent, with sales of 3.8 million vehicles.

Toyota Corporation is a Japanese automaker. It is the world's second largest automaker behind General Motors; however it ranks first in net worth, revenue and profit. It is also the only car manufacturer to appear in the top 10 of the BrandZ ranking.

Toyota plans to produce 9.95 and sell 9.85 million vehicles in 2008 setting an industry record if it happens.