By Margarita Snegireva. It is quite evident that Warren Buffet has had contradictory feelings towards airlines ranging from love to hate. 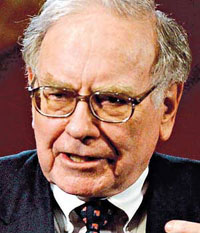 His NetJets fleet of private jets for the world’s elite is flourishing, and that airline could be moving major parts of its operations to North Carolina .

NetJets Inc. formerly Executive Jet, Inc. was founded in 1964 as the first private business jet charter and aircraft management company. The NetJets program was created in 1986 by Richard Santulli, the Chairman and CEO of NetJets Inc. as the first fractional aircraft ownership program. In 1998, after being a NetJets customer for three years, Warren Buffett, Chairman & CEO of the Berkshire Hathaway company, acquired NetJets Inc.

However, Buffett certainly will never forget the $385 million investment he made in US Air. In 1995, he wrote off 75 percent of that investment during one of the many upheavals that make airline investments adventures into the unknown.

Often called the "Sage of Omaha" or the "Oracle of Omaha", Buffett has amassed an enormous fortune from investments managed through the holding company Berkshire Hathaway, of which he is the largest shareholder and CEO. With an estimated current net worth of around US$55.4 billion, he was ranked by Forbes as the second-richest person in the world as of September 2007, behind Bill Gates.

Buffett is known for his unconventional style and frugality despite his immense wealth. His 2006 annual salary of about $100,000 is tiny by the standards of senior executive remuneration in other comparable companies, and when he spent $9.7 million of Berkshire's funds on a corporate jet in 1989, he jokingly named it "The Indefensible" because of his past criticisms of such purchases by other CEOs. He continues to live in the same house in the central Dundee neighborhood of Omaha, Nebraska that he bought in 1958 for $31,500, today valued at around $700,000.

In addition to Buffett's iconic image, he is a noted philanthropist. In 2006, he announced a plan to give away his fortune to charity, with 83% of it going to the Bill and Melinda Gates Foundation. The donation will amount to approximately US$30 billion, at the time of the announcement enough to more than double the size of the foundation. In 2007, Buffett was listed among Time's 100 Most Influential People in The World.