By Margarita Snegireva. Half of Wal-Mart employees have signed up for its health care plan, only a slight increase from last year but a gain for the company as it continues to battle labor unions over its treatment of workers. 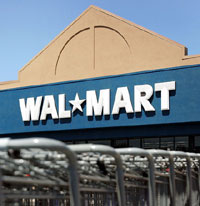 The Bentonville, Ark. retailer said yesterday that 50.2 percent of roughly 1.4 million U.S. employees enrolled in its health plan last fall, up from 47 percent last year. The company estimated that about 43 percent of its employees receive health insurance from another source, such as a spouse's plan or Medicare. About 7 percent had no insurance, down from nearly 10 percent last year.

Labor unions, religious organizations, and environmental groups have criticised Wal-Mart for its policies and/or business practices. In particular, several labor unions blame Wal-Mart workers' unwillingness to join their organizations on the company's anti-union stance. Others disapprove of the corporation's extensive foreign product sourcing, treatment of employees and product suppliers, environmental practices, and use of public subsidies, and the impact of stores on the local economies of towns in which they operate.

Critics decry Wal-Mart's employee and workforce relations, low wages, poor working conditions, and inadequate health care. They also denounce what they call the company's anti-union policies, and claim that Wal-Mart's high turnover rate (about 70% of its employees leave within the first year) shows that workers are dissatisfied with the lack of recognition and inadequate pay.

In response, Jay Nordlinger of National Review argues that Wal-Mart is attacked simply because it is a leader of the Fortune 500 list or the largest employer in America, and a "free-market success story". Penn & Teller devoted an episode of their show to an analysis of Wal-Mart criticism as a social movement. They theorized that despite the noble rhetoric, the real motivation of "Wal-Mart haters" was rooted in human psychology. They suggested that hating Wal-Mart permits a person "to feel better about themselves" for three main reasons: They "don't run a greedy international conglomerate", they aren't Wal-Mart workers, widely considered "low-skilled, minimum wage drones", and they aren't Wal-Mart customers thought of as "toothless, welfare-getting hillbillies".