Meg Whitman to retire after 10 years as eBay CEO 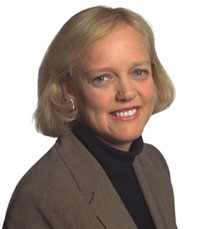 Meg Whitman to retire after 10 years as eBay CEO

Whitman, 51, recently has been entrusting more of the day-to-day responsibilities to others and "is completing her succession planning, say people familiar with the matter". She has held the top post since 1998.

According to the newspaper's sources, the decision about her retirement could happen in a matter of weeks, but "the situation remains fluid."

Margaret C. "Meg" Whitman (born August 4, 1956) has been the President and CEO of the online marketplace eBay since March 1998. Whitman joined eBay when the company had 29 employees and operated solely in the United States; eBay is now a global organization with over 11,000 employees. In addition to managing eBay, she currently serves on the Board of Directors of Procter & Gamble and DreamWorks Animation. According to Forbes magazine, Whitman was worth an estimated $1.4 billion in 2007. She is one of only seven women to have been repeatedly ranked among the world's most influential people by Time magazine.