By Margarita Snegireva. Stock market regulator CNMV said that trading in the shares of Inmobiliaria Colonial SA has been suspended ahead of a statement. 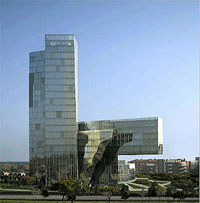 According to a report in Expansion at the weekend, citing unnamed sources close to the operation, General Electric Co is studying making a full bid for the property company.

The Spanish property group has been the focus of intense M&A speculation since its chairman and core shareholders were ejected from the board in a reshuffle just before the New Year.