By Margarita Snegireva. After China Eastern Airlines Corp. snubbed a bid to buy a stake, Air China Ltd. fell the most in four months in Hong Kong trading. 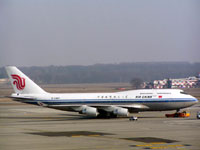 China Eastern's opposition may frustrate Beijing-based Air China's attempts to establish a hub in Shanghai and a dominant position in Asia's biggest aviation market. China Eastern's management aims to revive an alliance with Singapore Airlines Ltd. that was vetoed by minority shareholders earlier this month.

Air China is the People's Republic of China's state owned and second-largest commercial airline after China Southern Airlines. It is the flag carrier and the only airline to fly the PRC national flag on its entire fleet. Its logo consists of a phoenix in the form of the abbreviation VIP, and "Air China" in both English and Chinese, which was autographed by Deng Xiaoping. It operates 5090 flights each week worldwide and is also the 18th largest airline in the world by fleet size.

It currently doesn't belong to an airline alliance, but may be courted by Oneworld or SkyTeam.Airline has been given a 3-star rating from Skytrax.